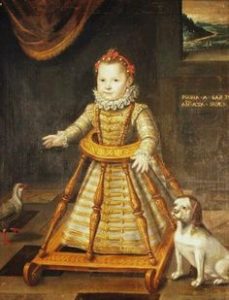 Our proud Barony is one member larger as of this weekend. Master Kameshima Zentarou Umakai and Her Ladyship, Isabel Fleuritan welcomed a healthy baby girl in the wee hours of 30 April 2016. Everyone is home and doing fine.

Archers of the BMDL!

We need to select a representative from our fine Barony to compete in the Scarlet Guard challenge at Hornwood! While normally my competitive ego would demand of me that I do this , I’m ineligible this year! So string your mighty longbow, deadly recurve, speedy horsebow or pinpoint crossbow, I fully expect my comrades in arms to bring a second victory to our Debatable Lands , let’s start a dynasty, shall we?

Here is the original challenge from The Order of the Scarlet Guard:

Unto all the groups of AEthelmearc does The Order of the Scarlet Guard wish to issue a challenge. This year on Saturday June 11th in the Shire of Hornwood at the Scarlet Guard Inn IV we are inviting every Barony, Shire, Canton, and College to send an individual to compete in an archery competition.

To enter each group can pick one representative, that is a member of that group, and send along a signed letter from the seneschal of the group as proof of entry. Only persons with a signed letter from the group’s seneschal will be allowed to compete. We would also ask that each group send a small item or token from their group that would then be put in the prize basket for the winner. There is also a banner for the winner to keep during the year. It is our plan to have the name of the winner and group he/she is from added to this banner each year.

Members of the Scarlet Guard are not eligible to shoot in this competition. Also the archer who won the previous year is also not eligible, that group may send another archer instead.

The winner of last year was The Barony-Marche of the Debatable Lands who sent Takamatsu Gentarou Yoshitaka as their representative.

It is our hope to continue this challenge every year.

The Order of the Scarlet Guard

If you have any questions please contact us at scarletguard_clerk@aethelmearc.org

Have you ever wanted to try your hand at gilding with real gold leaf but have been intimidated by the prospect?

Then come to this Gilding workshop, where you will learn to use a variety of binding mediums and how to apply gold leaf.

All participants will gild a notecard that they may keep for
themselves or donate to Their Majesties.. There is a $3.00 fee for materials.

Questions may be sent to mistressantoinettedelacroix at gmail dot com

Fencing practice will continue this week

After conferring with the attendees last week we will be continuing with a 1:00 PM start time for this summer.

A further reminder that next weekend, in addition to regular fencing practice on Sunday, there will be a demo at Pitt in Oakland from 12-4 which will be a further chance to fence.