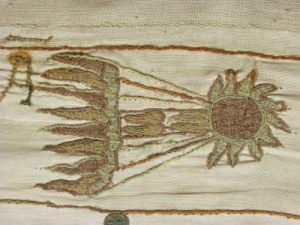 The December Officers Meeting will be on Wednesday, 7 December 2016 on the campus of Carnegie Mellon University in Porter Hall A18A. The meeting starts at 8:00p and ends at 10:00p.

If you haven’t gone into hibernation just yet, Your Captain of Archers will be on site with targets and equipment for some archery practice. Come on down between 11am and 2pm. Please dress for cold weather.

We will be having fencing practice this Sunday, going forward we will be reverting to our winter time of 2pm – 6pm.

Our location this week is once again the Pittsburgh Chinese Church at 8711 Old Perry Hwy, Pittsburgh, PA 15237.

We will be in the large activity room we used last time we were at the PCC on the second floor.

Our start time will be shortly after the ending of church services, so be polite with your parking.

As a followup to my previous post, I am still seeking letters of intent for the office of Comet Pursuivant, Baronial Herald. To this date I have received none. Please send your letters of intent to myself at “herald at debatablelands.org” and Odrianna, the Baronial Seneschal at “seneschal at debatablelands.org” or hand deliver them at the Officer’s meeting December 7 when the office changeover happens.

I will repost here the requirements for the office in case you missed them last time.

1) Coordinating with Their Excellencies regarding Their 5-8 courts a year (Comet does not need to run them all, coordinating deputies is perfectly viable)2) Being the point person for heraldic submissions (again Comet need not actually do the submissions you can instead direct inquires to our local heralds who are skilled in and enjoy armorial and name heraldry)

3)Running the official portion of the 6 barony meetings that we have each year.

5)Coordinating efforts towards heraldic education and preparing your successor

6) Maintaining the Baronial OP (this also does not need to be personally done by Comet, a deputy could be placed in charge of this, and will require coordination with the Webminister to continue doing it)

This week Byron and Ariella have offered us the use of their home in Wexford for our practice, as we have not yet been able to arrange other accommodations for our indoor site.

Fencing will run from 2PM until 6 PM in the great hall.

There will be loaner equipment available.

Unto the Barony, greetings from Kameshima, Scribal Guildmaster! Due to a modern-life conflict, Master Kieran’s “Introduction to Cadels” class will have to be rescheduled for a later date. In its place, Kameshima and Isabel will be teaching “Scroll Layout 101.” We will touch on topics related to both illumination and calligraphy, including scroll dimensions, how to use an Ames Lettering Guide, working from exemplars, required scroll information, and some basic layout ideas.

We apologize for the late notice, and we look forward to seeing you this Wednesday at BMDL Scriptorium!

As this Sunday is the Barony Meeting and Practices with PIE at the Castle in Wexford, there will be no A&S at Washington Blvd. Make PIE, eat PIE, vote for PIE!

Also, I am looking for an indoor location for us to meet, so please keep your eyes open and let me know if you find anything around. Examples of places on my list so far: Panera (but no privacy or reservations); Stoke’s Bar on McKnight Rd (private room available); JoAnne Fabrics (unused classrooms, reservations needed); Tech Shop (East Liberty (on bus routes, probably free).

So, looking for: anywhere central, easily accessible by bus, and free or low cost. Let me know of any ideas!

It’s been a busy fall season so far, with both Archers to the Wald and Agincourt in October, and of course the practices and meetings we’ve all been enjoying. We want to thank the autocrats of our events, THL Aaliz and Baroness Constance, and their amazing staff members for putting on impressive events. Not only did the people of the Debatable Lands enjoy the days, but you showed the entire Kingdom what this Barony can do, as it hosted four of the Kingdom Championships. Vivant to you all!
Speaking of Champions… Congratulations to our new Baronial Champions this fall! Lord Ronan O’Connal is our Archery Champion, with Duncan MacCoulagh as second, Carl MacBranduibh is our Youth Archery Champion, and Lord Kuma is our new Thrown Weapons Champion, with Eorl Byron as his second. Vivant to you all, and we hope many Debatable Landers will join us in Endless Hills on Sept 9th, 2017, to cheer them on as they compete in the Seven Pearls Championships.
Thanks, too, to all our retainers, champions, scribes, those who make tokens, and everyone who has helped make our Courts fun and easy, particularly Lady Rivka, THL Jorundr, and THL Rachel.
We’re very much looking forward to our annual Harvest Revel and Barony Meeting coming up in November. Don’t forget to bring your PIE! For in PIE there, is GLORY!
As the weather cools, we are now looking forward to Baronial 12th Night on January 21st. We will be holding Court then, and we need Comet Recommendations! If you see someone working and playing here in the Debatable Lands, and you think they should be recognized in Baronial Court, don’t hesitate to write to us to let us know! baron@debatablelands.org, and baroness@debatablelands.org. Additionally, we are very low on Comet award tokens. If anyone would like to donate some, we would appreciate it very much. We prefer to give pouches as tokens, but other ideas are medallions or belt favors. Let us know if you’d be able to help us with this, and we can give you more details.
Thank you all so much for being vibrant and integral to this amazing hobby of ours, that is so much more than a hobby. If you ever have and questions or comments, please do contact us by phone or email (See the Dark Pages), or by social media (Hilda on Facebook, Brandubh on G+). We will see you soon!
In Levitate et Cartitate, and Cheers,
Baron Brandubh and Baroness Hilda