The rain hasn’t stopped yet and the temps have stayed low so i am cancelling fencing practice today.

We will return to our normal schedule next Sunday. 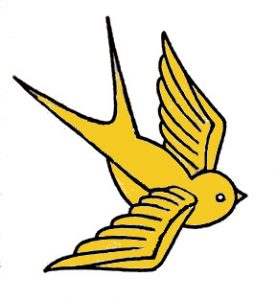 For those of you unfamiliar with the position of Social Media Deputy, the official description is that “the Office of Social Media encourages the enthusiastic but responsible use of social media on a variety of platforms to support the goals of the Society and introduce the Current Middle Ages to new audiences who might like to participate with us.”

Brehyres Gwen will be doing more with the day-to-day posting of things and is your point of contact if you would like your announcement, article, or information posted to the Stórfréttir. Contact her at socialmedia (at) debatablelands (dot) org.

Greetings from your Comet Pursuivant!

Here begins the report of the court of Brandubh et Hildarun, Baron and Baroness of the Debatable Lands, at Agincourt, occurring on Saturday, September 23, AS LII, Kieran MacRae, Comet Pursuivant, reporting.

Their Excellencies presented a gift basket of largess, made by the hands of the good artisans of the BMDL, to Their Majesties Gareth and Juliana, to be used during their reign.

Lord Markus Skalpr Grimson was called to announce the winners of the Pokerhand fencing tournament, and Mistress Gabrielle de Winter and Lady Ragna Haakonardottir were congratulated for their victories. For the Bar Room Brawl tournament, Countess Elena d’Artois, Don Jacob Martinson, and Nicole Coldren were recognized as victors.

Master Morien McBain was called forward to announce the winners of the heavy weapons melee bout between, appropriately, the English and French forces. Though the English forces prevailed on the field, their leader, Earl Thomas Byron of Haverford was unable to stay to receive the spoils of the accomplishment. Earl Byron had given instructions to have his noble counterpart, Sir Ulrich von Schwartzburg, receive the prizes for victory.

Lord Takematsu Gentarou Yoshitaka was brought forward to announce the winners of the archery tournament. Lord Alrekr Berghosen and Lord Ronan O’Connill were recognized as winners.

Their Excellencies thanked Baroness Constance Glyn Dwr for her work as the event’s autocrat and invited her to recognize others who helped put the event together to make it so magnificent.

Their Excellencies asked Raven Whitehart to come before them to thank her for her support of the Barony, teaching jewelry making at A&S nights, working at troll, and contributing beautiful scrolls for the Barony as a scribe. She was awarded a Comettus Amicus, the scroll a work in progress by Mistress Antoinette de la Croix.

Young Katrina Bease was invited before Their Excellencies to be recognized for her hard work training as a youth fighter and involvement in various A&S activities, and was presented a purple comet. Scroll by her proud mother, Nichola Bease.

Their Excellencies called Fox to present himself to be recognized for his skill and prowess as a youth fighter, winning the AEthelmearc division 2 champion tournament, as well as the Pennsic Known World baronial youth championship. Fox was given a purple comet, scroll by Lady Edana the Red.

Their Excellencies called forth Nichola Bease and thanked her for creating such lovely scrolls to recognize residents of the Barony, and awarded her a silver comet. Scroll by Mistress Graidnhe ni Rua.

Their Excellencies asked that all scribes and wordsmiths who contributed to scrolls that were distributed to rise and be recognized.

There being no further business, the court of Their Excellencies was closed.

Keep a lookout here for details on fencing practice tomorrow.

As of now fencing is a go, but weather is weather and field conditions tomorrow will determine what we do.

I am sorry to announce, due to the rain expected to roll through heavily, tonight and into tomorrow morning, site cleanup will be postponed for the following weekend. As will archery practice.

Hope to see you for clean up, next weekend.

It is with a very heavy heart that I relay the news that Master Augusto Giuseppe da San Donato, known as Joe the Just, mka Joe Piselli, passed away unexpectedly this morning.

He lived in the Canton of Beau Fleuve (Niagra Falls), in the Barony of the Rhydderich Hael. Many of you will have known him as the face behind the camera, and our previous Kingdom Thrown Weapons Marshal and Kingdom Chamberlain. He was also a dear friend to many, including ourselves, and traveled here to our Barony often. The SCA, Aethelmearc, and the world are a dimmer place.

We have no details on arrangements yet. I am sure they will be forthcoming in the days ahead.

Please let your loved ones know that they are loved.

The air is crisp, the skies are a brilliant blue, and the last of the colored leaves are just starting to loosen upon their branches. What all of that means is that it’s time for our annual Harvest Revel at the Castle (with PIE)!

The Harvest Revel will take place on Sunday, 19 November 2017 at the Castle (755 Stonegate Dr, Wexford, PA 15090 – map). There will be some changes to parking, so there will be further information coming with details about those changes as we get closer to the date.

The schedule has been updated and there is a change to the time of the Barony Meeting to accommodate other activities:

There will be the usual launching of the pumpkins towards the end of the day. So, bring a pumpkin and see it go “SPLAT” in glorious fashion. Only fresh pumpkins are allowed, no rotting ones as they are awful to try and clean up.

But I know what you’ve all been waiting for and that is the opportunity to win GLORY!!!

As the Baroness and her crafty cohorts work on specifics for the Pie Competition (and the chance for GLORY!!!). Here is what we know so far: The categories are FRUIT, VEGETABLE, and PERIOD. As always, the definition of pie is stretched to its absolute limit, all it has to be is a baked dish of fruit, or meat and vegetables, typically with a top and base of pastry. Whether you call it empanada, calzone, tart, Roman libum, pasty, pye, trap, quiche, tourtière, Bedfordshire clanger, or Bridie – it’s all pie. Ravioli? Pie. Piroshki? Pie. Chicken Pot Pie, even though it lacks the bottom crust? If Mary Berry says it’s pie. It’s pie. This competition is about creativity, joy, and most of all GLORY!!!

The schedule is still being confirmed and we will be updating as things are confirmed. If you would like to do something like offer a short class or coordinate some largesse-making activities (or anything else), please contact Odriana at seneschal (at) debatablelands (dot) org. For those of you who are concerned about such things, it’s a bye week for the Steelers.

As usual, no garb required, unless you really want to wear garb. We will be happy to see you regardless of your attire.

We thank Count Byron and Countess Ariella for again opening their home to us. If you’ve not yet been to the Castle, here is a link to the information website for the Castle. It’s even better in person.

If you’re on Facebook, please RSVP on the event page.

I’m very proud to unveil a new way for you, the populace, to give feedback to the Officers and Baronage of the Debatable Lands.

The Suggestion Box is anonymous, however, there is space to enter your name and email address if you would prefer a direct response. You also have the option to submit your feedback anonymously, as that tends to clear barriers to offering honest, constructive feedback. This means that persistent problems are permitted to continue becoming a source of conflict, unhappiness, and apathy towards participating with the Barony.

It would be remiss of me if I did not address the flip side of anonymity, and that is the potential for abuse. If feedback is abusive or harassing, the form will no longer be anonymous. Feedback that points out an uncomfortable truth is not abuse or harassment. Personal attacks, rumormongering, abusive language, threats against someone’s safety, trolling (saying something deliberately offensive or provocative with the aim of upsetting someone or eliciting an angry response from them), insults, and other forms of unacceptable behavior fall into the category of abuse and harassment. Please consider your words so we don’t have to remove this feature.

My promise to you as Seneschal is that your feedback will be listened to and taken seriously. This form is a tool to ensure that there is clear communication from the populace to the Baronage and Officers so that we may all improve and make an already amazing Barony even better.

Come join the Barony in helping to maintain our practice site.

Clean up starts at 9am.

Beat the BooZoo traffic and come early for Doughnuts, Cider, and some delicious stew. Bring rakes, and gardening gloves to help clean up the site area. Afterwards we will have our usual marshal practices. Hope to see you there!

Konichiwa Debatable Lands! This Sunday, October 22, there will be Thrown Weapons practice at Washington Blvd from 11-2. Leave early and allow time, as this week and next is Zoo Boo, and there will be much traffic.