This upcoming Sunday we will be having archery practice at the usual spot (Highland Park) 11am-2pm.

During this upcoming practice, Lord Ronan O’Conal will be running an archery tournament to decide who will represent the Barony Marche in the Scarlet guard challenge, at the event Scarlett​ Guard Inn.

Come one come all to Archery practice this Sunday. (weather permitting)
We’ll be out there shooting 11am-2pm. ^_~’ See you on the Highland Park Field.

We are very much looking forward to Heavy Fighting and Rapier Fighting Champs Tourneys this Sunday at practice in the parklet at the corner of Washington Blvd and Allegheny River Blvd! Rapier starts at 2pm, Heavy at 3pm. Anyone residing in the Debatable Lands (including Steltonwald), or who has a Green or “Friend of the Barony” Comet is eligible to become champion, but we welcome all to participate for fun!  Champions and seconds are invited to attend the 7 Pearls Event in September in Endless Hills to compete for the glory of the Debatable Lands against the other Baronies! More info on formats below from the outgoing Champs.

From our Rapier Champion:

Greetings my fellow Debatables!!!! The time has come again to find a new Rapier Champion. It saddens me greatly to step down as (albeit substitute) champion and I am extremely proud to have held the mantle for the time I was given. On Sunday 5/28 a tournament shall be held at the outside practice site (location information to be included in the comments) at 2pm. The tournament shall be open to all rapier authorized citizens of BMDL, the Canton of Steltonwald, and those who have been awarded a Green Comet as Friends of the Barony. The tournament format will be as follows…

Round Robin (everyone shall fight everyone)

All combatants shall rotate through 5 forms before being allowed to repeat a form.
Any combatant who is not authorized in a form shall default to Single Sword.
Combatants are NOT required to match forms (Cut and Thrust being the only exception to this rule).
NO Combatant is required to agree to fight against Two-Handed or Cut and Thrust styles. If not agreed upon, combatants must select from one of the base 5 forms.

The finals shall be a Best of Five.
**Forms shall be matched
**Forms will be as follows-#1 Single Sword, #2 Sword and Parry (either soft or rigid), #3 Sword and Dagger, #4 Case of Swords, #5 (should it come to that) will be Baronial Choice.

Based on the number of combatants…
3-5 combatants = all combatants shall fight a best of 3, forms must still change to complete the swiss 5
6+ combatants = fights will be a single pass, forms to be changed with each fight until 5 forms have been reached.
if less than 3 opponents, their Excellencies shall decide what action shall be taken.

I look forward to hearing the results and future of my beloved BMDL.

From our Heavy Fighting Champion:

Fighters of the Debatable Lands! Your heavy weapons champion commands your attention.

My time as Baronial Champion comes to a close this Sunday, when a tournament to determine the next champion shall be held. All good and able fighters are invited and encouraged to armor up (and fix what needs fixing from War Practice!) and come to the Washington Blvd. practice site this Sunday, May 28th. The tournament will begin at 3pm! All fighters who reside in the BMDL are eligible to enter this tournament, by decree of Their Excellencies!

Depending on the number of entrants, the tournament format will be either Round Robin, or, in honor of my lovely wife Odriana, using a Dutch system*. Bring what weapons form you have, several will be called upon, and what you don’t have can be loaned to you that day.

What does it mean to be champion? Firstly, it means representing the Barony-Marche of the Debatable Lands with honor and chivalry! As champion, you are our entrant in the Seven Pearls Baronial Champions Tournament** in September, where you will fight AEthelmearc’s other baronial champions. You are also invited and encouraged to fight at the Baronial Champion’s tournament at Pennsic (should you be attending), which occurs during War Week.

It has been an honor to serve as your heavy weapons champion this past year. I eagerly await to see who’s hungry to step up and take my place! 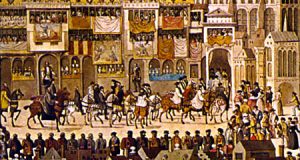 Good afternoon from this year’s lunch cook. Here is the English menu. I am very excited to be working on this and can’t wait to get the details on the what I hear is going to be a rockin French feast.

I have started all of the documentation for these recipes in order for them to tested and tried. I have several people that have asked or I have asked to take on one of the items so that everyone can get familiar the feast preparation process. If you are interested in maybe taking on a recipe reach out and let me know.

I have several people that are making parts of the items such as pickles and smoked olives – growing fava beans – making a cheese – churning butter. If you have something you are working on or would like to try on a smaller scale – let me know.

We will need set up – refilling – and clean up helping hands as well. If you know of a youth that would like to get involved – let me know. There are many ways to let them get involved in the kitchen.

If you have questions or need to reach me you can comment here – send me a PM through Facebook (comment that you did so that I know to check there) or email me at ladyzianna at gmail dot com.

Greetings from your Comet Pursuivant! Perhaps you missed last night’s Online Heraldic Office Hours because you were busy. Perhaps you were tired. And here you are, still with interesting questions or curiosities about heraldry. What to do?
Well, you’re in luck! Because this Thursday, May 25, starting at 7pm at Victory Pointe in the South Side (1113 E Carson St, Pittsburgh, PA 15203), there will be a heraldic consult and class featured at the BMDL’s A&S night, organized by THL Elss Augsburg! Come down and speak up close, in person, with not just one herald, but at least three of the BMDL’s most skilled and abled heralds! Get help with your name, device, and/or badge! Find out how to help with announcements, heralding at court, and even how to become a herald!
I hope you will join us Thursday! It’s going to be a great time!
Kieran MacRae
Link to google map location: https://www.google.com/maps/place/Victory+Pointe+Arcade+and+Gaming+Cafe/@40.428945,-79.986894,15z/data=!4m2!3m1!1s0x0:0x9b86ffe6073f0426?sa=X&ved=0ahUKEwimrKO8vIbUAhUBPCYKHbjgCk0Q_BIIgQEwCw

I will be holding my online heraldic office hours tonight from 7pm – 9pm. Follow the link below to connect to a Google Hangout to discuss or ask questions about period devices, badges, names, or getting to talk REEEEEEAL loud at various times during events. Other heralds are welcome and encouraged to join in to aid in people’s questions!

Here is the link: https://plus.google.com/events/c8js5tueic0g97cr9aa440nciec?authkey=CO-n-MOlz5CZXQ

I hope you will join me!

As many of our archers know the Scarlet Guard Inn is scheduled for June 9-11 and will feature the best archery experience in Aethelmearc. Prominently featured will be the Scarlet Guard Challenge where one archer from each group in the kingdom is invited to vie against all other group’s representatives in this kingdom wide challenge. How is that 1 representative chosen, you might ask?

Lord Ronan, who was the representative for the Barony at last year’s Scarlet Guard Inn, will host a challenge tournament on Sunday June 4 at Archery Practice, and invite the winner to compete in this intra-kingdom competition. So wax your strings and straighten your arrows, this will be fun and challenging!

Baron Brandubh and Baroness Hilderun send fond greetings to you on this fine May day. We wish to invite all Heavy Weapons Fighters and Fencers to join us at Practice on Sunday May 28th as we host tournaments to determine Our next Heavy weapons Champion and Fencing Champion. We will begin with the Fencing Championship to be held at 2:00 and then follow with the Heavy Weapons Championship at 3:00

All residents of the Barony are welcome to fight in either tournament, and any holders of the Comettus Amicus (Green Comet) are invited to compete as well. The winners and seconds will be expected to fight in the 7 Pearls Championships in Endless Hills on September 9. We look forward to the displays of skill and prowess!

This Sunday we will have archery at our usual spot, Highland Park. Looking forward to seeing everyone there. 11am – 2pm.

There will be fencing practice this Sunday at Washington Blvd.

Next week there will be no practice as War Practice is that weekend.

The week after, Memorial Day weekend, we will return to Washington Blvd for practice.