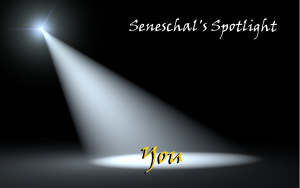 The Seneschal’s Spotlight is a monthly feature that highlights an aspect of the Barony and/or its people.

It’s New Years Eve and traditionally, a time for reflecting on the year that has just ended.

The Barony-Marche of the Debatable Lands is an amazing group filled with talented, passionate, fun, interesting, and smart people. Each one of you makes up this Barony that I love so much and without your presence and participation nothing that we do would be very interesting or much fun. It doesn’t matter if you’ve been playing with us for a month or for 50 years, your contributions are appreciated and wanted. Thank you to everyone for making 2017 awesome.

For all of us, let’s make 2018 a year where we pick up a new skill or become better at a recently learned skill. I’ve seen quite a few more seasoned members of our Barony pick up fiber arts, illumination, and making new clothing for themselves to suit their persona better. Us old dogs can indeed learn some new tricks. If you’re a relatively recent participant and you’ve been considering attending a Fiber Arts Guild meeting or an A&S Meeting, make that plan. Set your goals reasonably and don’t worry about where someone who has been doing something for 20+ years is in that art, they started somewhere and, if my own attempt at Medieval Spanish Clothing this year are any indication, beginner work looks pretty much like everyone else’s beginner work.

If your thing is Service, consider volunteering to do a thing you’ve not done before or not done in a while. If you usually Autocrat, volunteer to help with setup/cleanup. If you are usually Head Cook, volunteer to Autocrat. If you aren’t sure about what you’d really like to do, there is no harm in asking an Autocrat what things they need help with with their event. There’s even an upcoming event specifically geared towards getting new people involved — Tavern in the Park — THL Elß is autocratting and if you want to help with that, contact her at ansminister(at)debatablelands(dot)com.

This last year was an amazing year for Our Glorious Barony, I know that 2018 will be even better.

Copyright © 1997-2021 Barony-Marche of the Debatable Lands. The original contributors retain the copyright of certain portions of this site.