The Report of the Court of Their Excellencies Brandubh et Hilderun, Baron and Baroness of the Barony-Marche of the Debatable Lands, Court held at Equestrian Practice on the 24th day of November anno societatis 52.

Their Excellencies thanked Their Equestrian Marshal Lady Gesa von Wellenstein for organizing the day and riders, her grounds crew, and all the riders: Leah of the Debatable Lands who rode Daisy, Lady Beatrix of Aglesey who rode Maple, Emma who rode Remmy, Jackie who rode Daisy, THLord Kumagaya Kentarou Masamoto ho rode Maple, and Viscount Alexander Caithnes of Wyk who rode Taco, and presented each with a ribbon for participating in the first Debatable Lands Equestrian Championship.

His Lordship Kumagaya Kentarou Masamoto was then called forth and named the victor as he had won the tournament by points, and Their Excellencies invited him to stand as Their Premier Equestrian Champion, presenting him with the Champion’s Belt Favor made by Lady Gesa von Wellenstein, a carrot for his winning steed Maple, and a scroll by the hand of THLady Rachel Dalicieux. 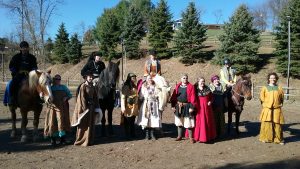